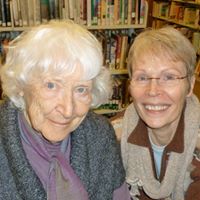 SHARK REEF cofounder, Alie Wiegersma Smaalders, was an accomplished writer. Born in 1923 in Friesland, a northern province of the Netherlands, she came of age during World War II when the country was, for five years, under German occupation. Her first published work at age fourteen appeared in a national Dutch newspaper. She received a Fulbright award to study at Carnegie-Mellon University and went on to study at UCLA on an Alpha Xi Delta scholarship. She worked as a reference librarian in Amsterdam and, after emigrating to the U.S. in 1954, at the University of Southern California.

The Judgment Tree, Alie’s collection of short stories, earned her the prestigious Jack Straw Writers Award in 2001. She was also selected by Jack Straw in 2004 for a matching grant that allowed her to record on CD The Sky Was a Brilliant Blue, a collage of her stories about living under German occupation in World War II.

This is the story of how SHARK REEF came to be and of the remarkable woman, writer and friend, who modeled what it is to be a writer.
~~

“Writers grow on the trees on Lopez,” Alie Smaalders announced to me in our early days together in the late 1990s. It did seem true. Memory is hazy at best but in my mind’s eye, I still see fellow writer Laurie Parker and me stopping on the wooden library steps after a reading by local writers. It was a dark night, and cold. Excited, one of us said, “Let’s start a writers guild.” I remember adding, “We have to talk with Alie.” And we did.

I’d taken a memoir writing class on a neighboring island a couple of years earlier, and that’s how I met Alie, our teacher. Weekly, I made the trip with three other Lopezians. We’d meet at the ferry dock, Alie toting a canvas bag chock full of books about writing. In class, she showed us how to “cluster” and free write from prompts that made us dig into our personal stories.

When the seven-week class was over, we four agreed we wanted to keep meeting during the hours we’d been in class. Alie stuck with us long enough to get our group started. From the experience of her own decade-old writing group, she taught us how to structure the group and how to organize the critique/revision process.

“Listen without interruption while others are commenting on your piece,” she said, “even if you don’t like what you’re hearing. You are the writer, and you can decide what to use and what to discard. But you might be surprised to find something you first objected to has merit.” Though this is common practice now for anyone who’s ever attended a writing workshop, it was completely new to us novices back in 1997.

Twenty years later, I am delighted to say that our group is still going strong with nine members, several of them published authors.

Alie, Laurie Parker and I together founded the Lopez Writers Guild. Our first meeting opened with Alie reading a quote from Margaret Atwood about calling oneself a writer. I’ve looked in vain for that quote but found another almost as good: “If I waited for perfection, I would never write a word.” Exactly!

The Lopez Writers Guild flourished for several years, organizing presentations and workshops about various aspects of the writer’s life. Our most popular achievement was a years-long series of Lopez Writers Read evenings at the local community and arts center. Alie and I collaborated on these readings for several years, inviting writers whose work we felt would insure the audience a good experience, too. Alie counseled the writers beforehand about how to read in front of an audience. These events garnered audiences of up to 75 people – and sometimes more.

In 2000, inspired by the possibilities of the nascent Internet, our Guild trio decided to start a literary magazine geared towards our community. We invited submissions from any Lopez writer and drafted accomplished writer and journalist Leta Marshall to create the layout. We christened our fledgling magazine SHARK REEF after a beloved spot on our island. We chose that name because it had a bit of “bite” to it.

In the early days of SHARK REEF, we’d sit around Alie’s dining room table and pore over the submissions. Alie and her husband Oscar had both been librarians, and the walls of their home were covered in shelves stuffed with books — in English and Dutch. Books spilled out onto tables, chairs and the floor, but Alie knew where every single one was shelved. We’d drink tea, munch on Dutch cookies and discuss submissions.

I still miss those days.

After publishing five issues of SHARK REEF to local praise, we felt bold and decided to publish a paperback anthology of previously-published selections. Titled Currents, this volume of pieces, chosen by several on-island and off-island readers, appeared in 2003.

Now, though it seems like yesterday, SHARK REEF Literary Magazine has been publishing since 2001, with submissions and readers coming from across the country and around the globe.

Alie advised, encouraged and supported many of us. Laurie Parker was in her forties when she first met Alie, then 70. “She lived an incredible life as a survivor, activist, ex-pat, librarian, historian and creative writer. She was kind, honest and clear, and there’s a bravery to that kind of dauntless honesty.”

Laurie remembers that Alie always arrived at a SHARK REEF editorial meeting with the intention to go deep into any subject. “Small talk was never her thing.” As the mother of young children herself, Laurie admired how Alie juggled her many roles. “She was a model for me on how to age, how to be honest, how to live life authentically.”

“Mentor” is the first word to come to mind for Iris Graville, publisher of SHARK REEF,“ and she was that for countless writers,” Iris noted. “She had such respect for words and for the writer’s voice to come through. She was also a fierce defender of quality, walking that line of insisting on quality without being cruel or discouraging to new writers.”

Alie also was a mentor for another Lopez writer, Kathleen Holliday. “Generous with her time, she was understated about her accomplishments. She was soft spoken but gave me suggestions on how to read my work at events. Her best advice: ‘Read slowly; your words are new to people.’”

Author Migael Scherer, who belonged to the same writing group as Alie, loved listening to Alie’s voice. “It was soft and strong at the same time and with a pronounced Dutch accent even after living for over 50 years in the U.S.”

Kip Greenthal, probably Alie’s oldest writing friend, recalls, “I met Alie, my fellow brave writer, in 1984 when she gave me one of her Seitska stories.” Seitska was a fictional character from The Judgment Tree. Over time, Kip recognized that the imaginary young Dutch girl coming of age in the occupied Netherlands was, indeed, her friend. Kip says, “Alie’s loyalty to her native homeland was irrepressible.”

Kip saw Alie’s courage grow as she entered her eighties and dealt with macular degeneration and neuropathy. “She knew she was in the unique position to write from that backward gaze of old age and wrote several poignant pieces about facing death.”

Alie loomed large in my own writing life as well. My work before moving to Lopez had been as a writer and producer of newsletters for business and non-profits; it had never occurred to me that I might have my own writing voice. Thanks to her, I gradually began to see that, after years of writing other people’s words in my business, I could write my own. Alie had unknowingly opened the writing door for me.

I still remember the first short story draft I gave to Alie. Back then, we distributed hard copy to one another the week ahead, reviewing and critiquing the work by scribbling comments on the pages. But I’d given this draft privately to Alie, not sharing it with the women in my writing group. When she returned my draft to me, I saw comments in both margins on all the pages. But at the top she wrote: “Don’t be discouraged!” I didn’t have the heart to look at that draft for a full year. When I did, I quickly saw how right she was.

Later I was invited to join Alie’s writing group as well, so I was for a while fortunate enough to be in two groups. The last few years Alie participated in this group, her macular degeneration prevented her from reading our work. We’d read aloud anywhere from two to five pages or more when we met. Alie had such a good ear that, when it came time to comment, she could hear the tiniest detail that wasn’t quite right. I still marvel at that.

When I was invited to join seven other women in a care circle for Alie in her last years, I jumped at the chance. Each week one of us would schedule two hours to help in whatever way she needed. I became her transcriber. She would dictate stories and memories of her early life to me, often a bit faster than I could get it down. Frisian words often crept into her text. “Wait,” I’d say. “Will you spell that, please?” After she died I sent all of her work to her family. Of course, I kept a copy.

The last time I saw Alie, she was preparing to move to an assisted living complex. She directed me to her poetry shelves and asked me to choose some for myself. I selected seven and brought them over to show her. “Oh, that one is Oscar’s so I think we’d better keep that,” she said. “Kip gave this one to me so I’d better keep it.” On we went through each book and, the only one I was allowed to take home was a volume I’d given her years before!

Alie Wiegersma Smaalders meant so much to many of us. I hope this love letter to her — writer, friend, mentor, mother figure, collaborator – communicates some of her generosity and brilliance. It seems fitting to end it with Alie’s own words from her essay, Twenty-One Minutes Before the Hour.

“I am inclined to put things off as if I had oceans of time. Oceans of time to put my house in order, to write everything I want to write, easily a few decades worth. Even if I have some years left, can I count on still being able to write? The answer to that question is of course no. Life offers no certainty, ever.

“Time and death are intertwined. The poet W.S. Merwin reminded us that there is one particular day each calendar year which sooner or later will be our very last day. Each year we pass that day without any concern; we have no idea when our time will be up.”

Twenty-One Minutes Before the Hour, originally published in our Nine Eleven Special Edition, is reprinted in this issue of SHARK REEF. To read Alie’s other work, go to “authors” and enter her name.

Lorna Reese is a founder and was managing editor of SHARK REEF for most of its first eighteen years and is now editor emerita. In the past, she worked with different co-editors for each issue of the magazine, loving the collaboration with other writers. Lorna lives on Lopez Island, WA and continues at SHARK REEF, working mostly behind the scenes. Her memoir essays and fiction have been published in SHARK REEF, The Sun Magazine and The Islands Weekly. She delights in acting as a sort of midwife for other writers and has made the acknowledgements page of at least twelve books.

All work by Lorna Reese